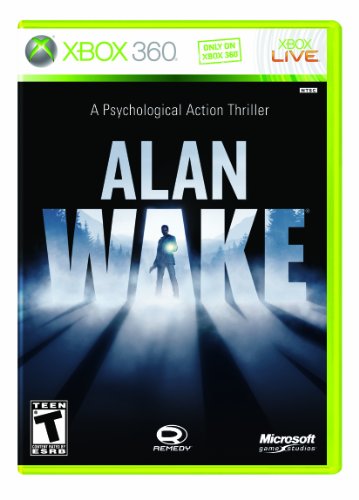 I have few words for Alan Wake‘s gameplay, which is neither awful nor fantastic. I echo the praise for the game’s atmosphere and its associated light/dark gameplay mechanic. But I could write a whole book (under the guidance of my own particular Dark Presence, no doubt) about this game’s incoherent plot.

Early on, I had my own theories about what was actually going on, about which parts were real and which were not. About halfway through, the story shifted in a way that invalidated most of my theories. It seemed to be building toward an ending that I wouldn’t have liked, but would have respected, because it would at least have given measurable meaning to the events of the game.

Soon after, though, the story veered off and headed straight to Crazytown. There were exits along the way — opportunities for the plot to get back on the Sense‐Making highway — but by then the cruise control had been engaged and nobody was behind the wheel. (I’ve abused this metaphor.)

The game has an ending — or, at least, a series of disjointed vignettes; I only know it was the ending because it happened right before the credits. “But surely they’re setting up a sequel,” you might be saying, and you’d be right; but that’s part of the problem.

There is economic incentive for Remedy to make Alan Wake into a franchise. You make more money from three games (and the odd bit of DLC) than from one. But sequels must build upon solid foundations. You don’t make one story into two by chopping it in twain, just like you can’t separate a verse and a chorus and call them two different songs.

Which brings me back to King’s remark. If you’ll humor me, there’s a vast difference between a story that cannot be explained and one that makes no sense.

Thrillers often feature supernatural elements that prey upon the fears of the charaters and the audience alike, and that’s fine. I don’t need to know why there’s a sinister clown called Pennywise who torments a ragtag group of kids in a small town in Maine. I’m happy to accept it as the premise of a story that furthers some other storytelling goal.

Similarly, I’m more than willing to accept the unexplained “Dark Presence” that pushes the titular author to finish a manuscript that becomes reality as he’s typing it. But I can’t forgive a story that deliberately leaves plot threads unresolved, which appears to arrive at “answers” that are mutually incompatible, which leaves the reader to “draw her own conclusions” when there are no conclusions to be had. It’s the crutch of an unskillful writer. Other stories, and even other video games, commit the same sin. As far as I know, none tries to justify it with a misreading of something another author said.

Alan Wake divides itself into episodes, each with its own cliffhanger; it begs to be judged by the way it creates mysteries and then solves them, as if it were Twin Peaks or Lost. I am happy to oblige: by this standard, the game is shit.