The recent mailer from the U.S. Census Bureau struck a chord with two of my hobbies: information design and open government. Today I’ll be redesigning a piece of paper that looks mundane but has an astonishing impact on the amount of money our country is spending to conduct the 2010 Census. Sometimes good design can solve large‐scale problems.

Like most Americans, I received the U.S. Census “short form” in the mail a few days ago. The form was accompanied by an introductory letter, and on the back was this interesting notice: 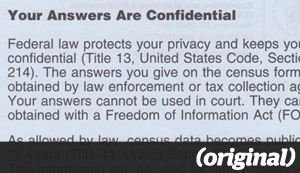 The Census is mandated by the U.S. Constitution. Participation in the Census is required by law. Census data must be confidential in order to ensure residents will participate and give truthful answers.

The 2010 Census site further states that information given in the Census is protected from disclosure by Census workers under penalty of jail time, a really huge fine, or both.

What does it mean?

To understand why confidentiality is an issue for the Census, we needn’t look back very far. The FBI famously scoured Census records during World War II to assemble the Custodial Detention Index used in the internment of Japanese‐Americans.

This violation of trust can never be atoned for. But laws protecting the secrecy of Census data were re‐established after the war, with strong penalties for those who would break them. In recent years, Courts have upheld the confidentiality of Census records even in the face of FBI warrants and pressure from the Department of Homeland Security.

The response rate for the mailed short form is a critical metric — Commerce Secretary Gary Locke, interviewed last week on The Daily Show, estimated that a 1% rise in the response rate saves the government $87 million.

The Census Bureau is forecasting that 64% of households will mail back the short form. That would be a decrease from the 67% response rate of the 2000 census. Possible contributors: home foreclosures, the Katrina diaspora, growing political sentiment against illegal immigrants, and batshit crazy elected officials.

Therefore: the bureau is going to great lengths to increase the response rate. As Locke explained on The Daily Show, they sent out a preliminary letter to every household telling them that they’d soon be receiving the short form; they believe it’ll raise the response rate by 6–12% simply by spreading awareness.

I can only conclude that the confidentialy message on the leaflet shown above is specifically aimed at improving the response rate by placating those residents that are paranoid about what the information will be used for.

So what’s the point?

With all this in mind, I was disappointed in the information design of the confidentiality notice. In my opinion, it merely murmurs an idea that it ought to be bellowing — that privacy is a paramount goal of the Census and that the recipient need not worry.

Information design consistently lags behind in the public sector, so I shouldn’t be too surprised. Still: since the response rate is so important, why not design the hell out of this one sheet of paper? If better design raised the response rate by even 0.1%, wouldn’t the corresponding $8.7 million in savings demonstrate that the money for that design was well‐spent?

Anyway. I’m not an information architect, but I do play one on my blog. I submit my sample redesign, a 45‐minute effort in Pages: 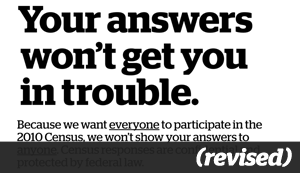 The largest text is devoted to a simple, important message: you need not fear the Census. Even if a recipient reads nothing else on the page, it would be nearly impossible for him to open the mailer without seeing this message.

The rest of the content reflects what I think I’ve learned in the ten years I’ve spent writing for the web. The content of the original message’s first paragraph is now a bulleted list; it contrasts with the text above and below and draws the reader to rebuttals of specific fears she might have.

I think it’s more communicative. But, of course, I would think that, since I made it. I’m curious to hear what you think, and whether further improvements could be made.