Here’s a lovely pagination control I looked at on PSDTUTS today. Actually, first I used it; when it took me to a page I was not expecting, I hit the Back button and looked at it. 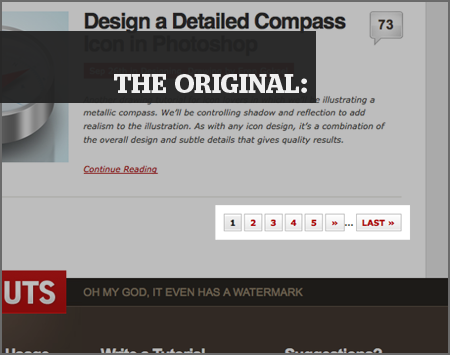 It’s a testament to both my arrogance and my compulsiveness that I found five things I could “fix” about this control before I went back to whatever I was doing.

Now, I’m going to treat these as though they’re improvements, but you may think some of these suggestions are bad — or, at best, merit‐neutral. I never said I was good at this.

But here’s where I would start. 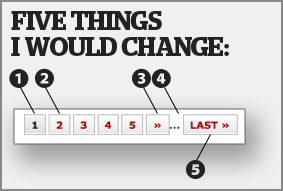 Wait! Cancel the ordered list. I’ve got to make this into a section.

Aside: I hate “last” and wish it would go away

In this example, we’re on page 1 of the list. Knowing nothing about the user, which page is she likely to choose next?

Obviously 2 is most likely. I’d say 3 is next most likely, though far behind 2, and 4 would follow in the same suit.

But where does “last” fit into all this? In a chronological listing like this one, “last” would take us to the earliest entries in time — it’d reverse the sorting, in a way, letting you paginate backward while traveling forward in time.

In blogs and forums, for which freshness is paramount, there’s little use for wanting to see the oldest items. Or consider a list of YouTube videos sorted by popularity, or WordPress plugins sorted by rating. What self‐hating soul would opt to see those items judged the worst of the worst?

Despite the rage‐fest, I’m going to let “last” stay on screen — but only if it accepts a massive cut in size and stature.

But I’m going to start from the outside in. “Next” and “previous” will get top billing; the current page number will play a supporting role; and all other numbers will play bit parts.

One iteration later, here’s what I’ve got: 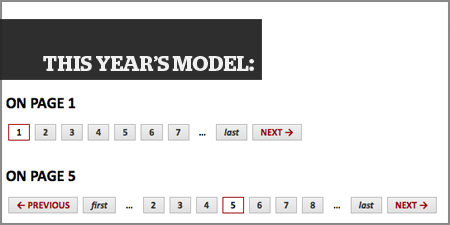 Here’s the HTML version so you can play with the hover states. The result probably needs some visual tweaking to look as polished as the original, but I’m quite satisfied with the usability gain.

Fine, fine, I’ll give you the Cliffs Notes version. Here’s how to paginate: